It’s Day 5 of the Inaugural Transatlantic Cruise on Norwegian Bliss.

This morning we found land for the first time! The ship backed carefully into the port of Ponta Delgada on the Azores just as we were eating breakfast. 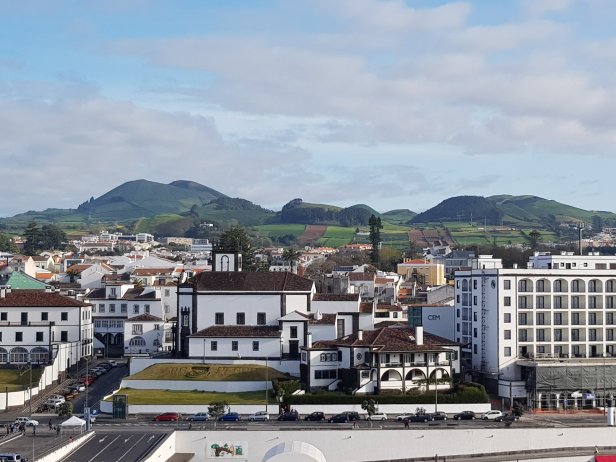 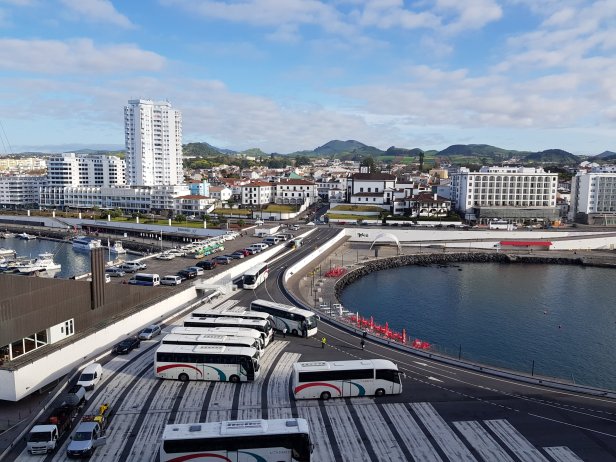 The main town looked pretty built up and we watched as the excursion coaches streamed along the seafront to turn into the port area.

Anyone on a ship excursion was instructed to wait in the Bliss Theatre for their excursion number to be called. They could then collect a bus number sticker from staff before heading down to the gangway on deck 4 to enter the cruise terminal.

Those who wished to could do their own thing – walk around on their own or approach the group of guided tour or taxi greeters at street level.

It was a public holiday for Portugal so a lot of shops were closed. Even the Burger King near the terminal was shut but their Wi-Fi was still available which meant there was a huddle of people sat around outside using it.

We walked along the sea-front – there are some beautiful buildings here. 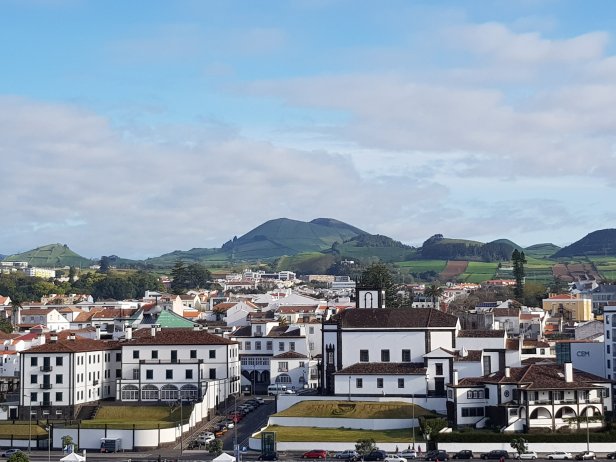 We got to spend some euros in the gift shops that were open. I always look for some oddly flavoured local jams for my folks to try and found some.

The ship looked wonderful in the sunshine. 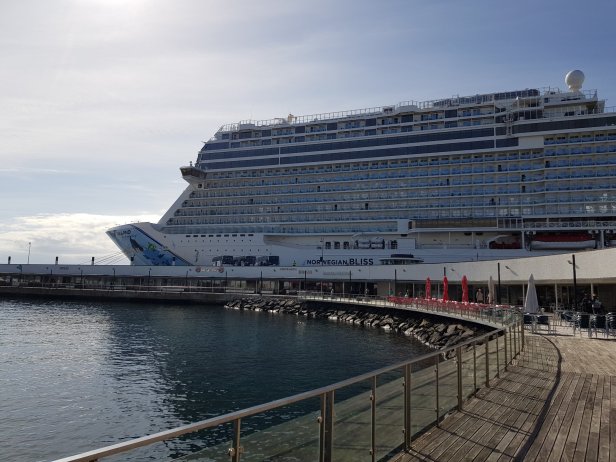 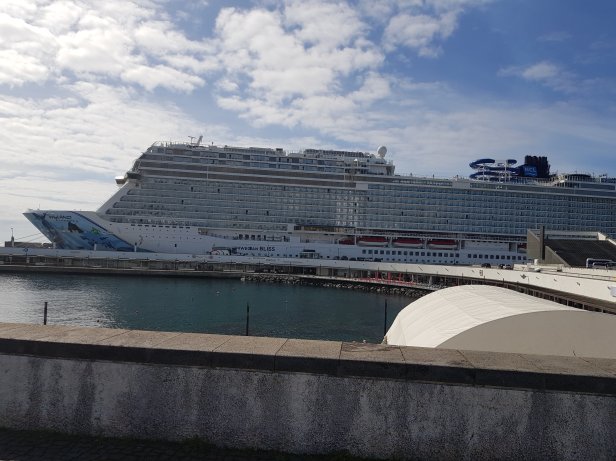 Chris caught the sun and was worried he had got sunstroke so we headed back to the ship so he could lay down in the dark cabin while I walked around deck 17 taking some pics in the sunshine.

We liked this hot tub near the entrance to Vibe: 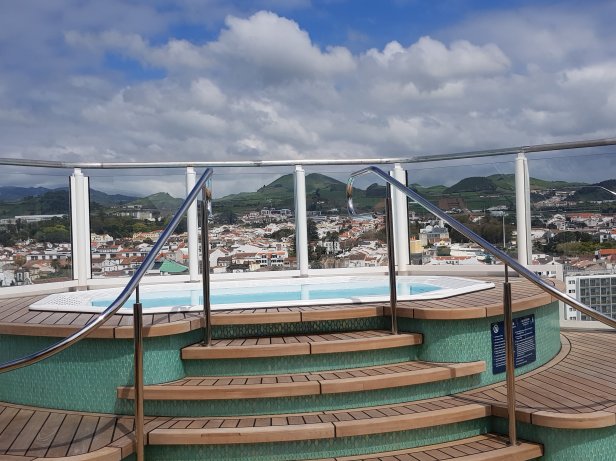 And the pool deck being used for once; 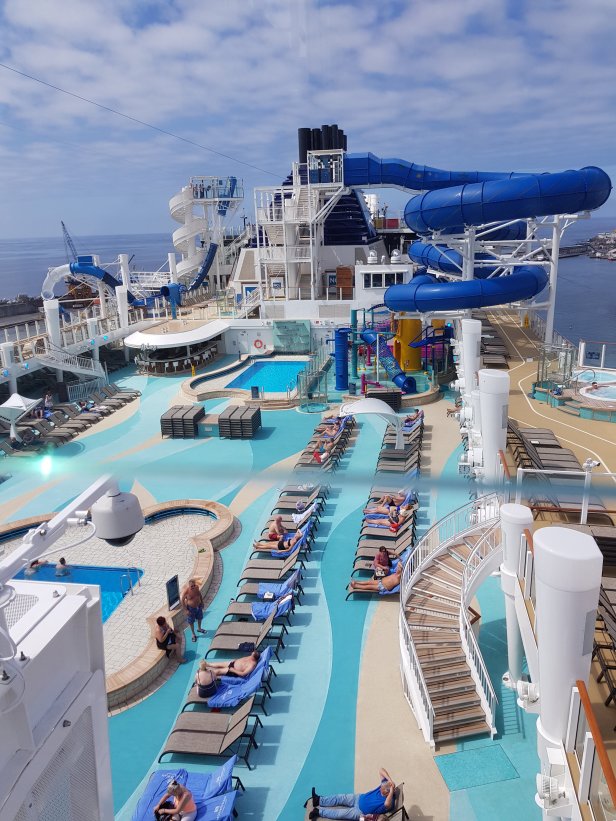 There are also these chairs open to the sun looking over the pool deck: 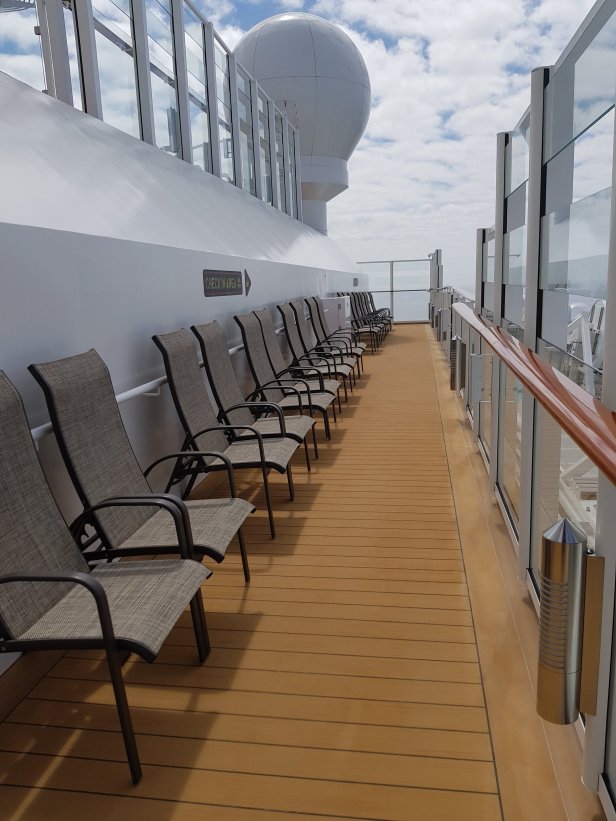 Parked up next to us was the Holland America ship Prinsendam which looked tiny in comparison to Bliss. 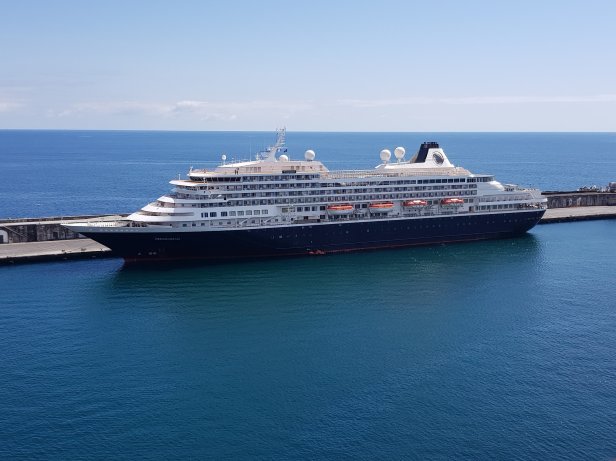 We had pre-dinner drinks in the District again and then headed down to Los Lobos for dinner.

We wanted try a few things from the menu so chose a few appetizers to share, an entree and dessert each. 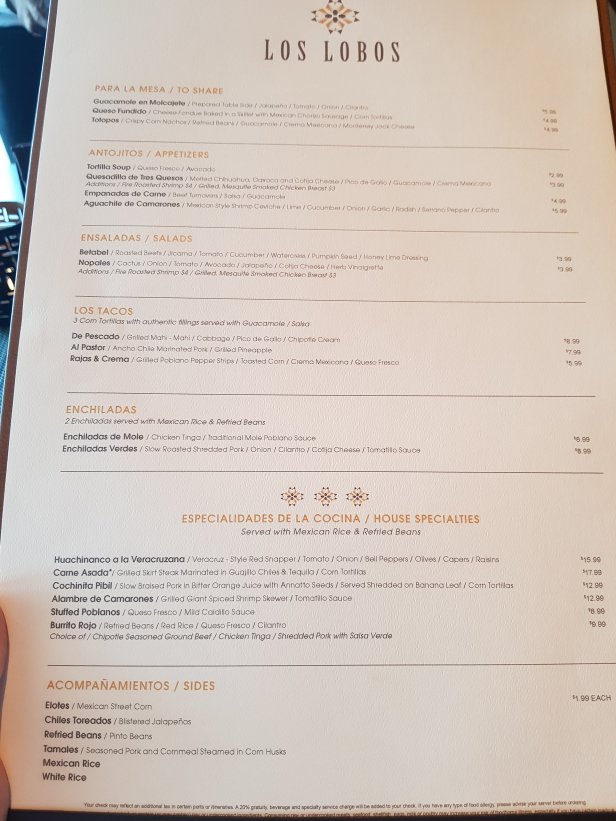 Chris wasn’t a fan of the taco fillings but we later heard another table order Chicken Tacos so may give that a try next time.

There is a scrollable tablet listing the drinks available and Chris chose a Luna Margarita while I stuck to sparkling water. 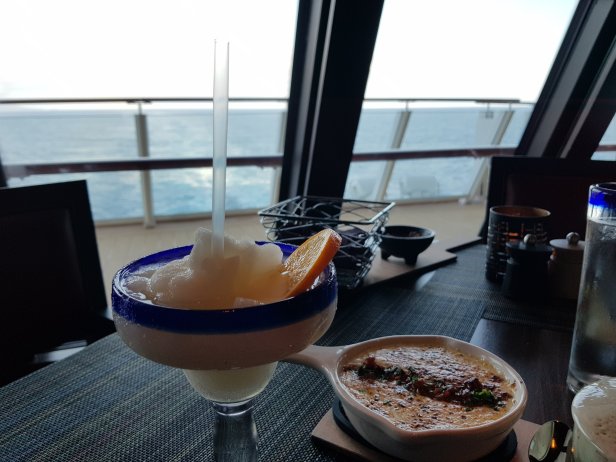 We were seated at a table with a fantastic aft view. 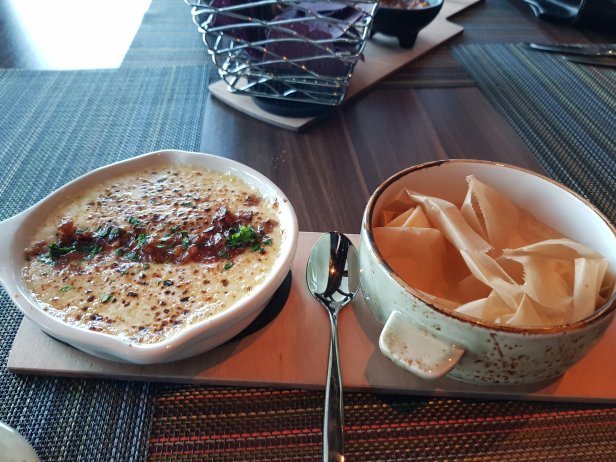 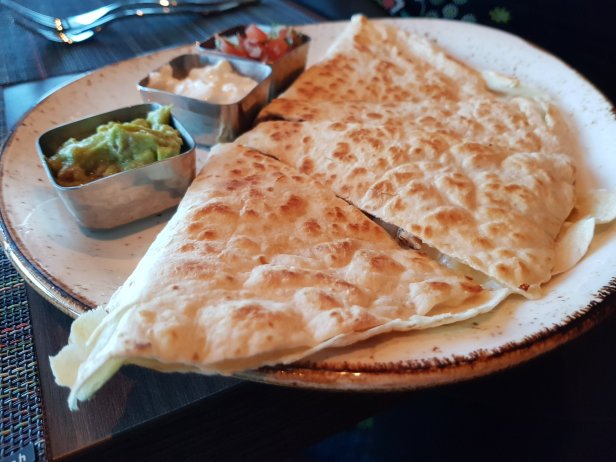 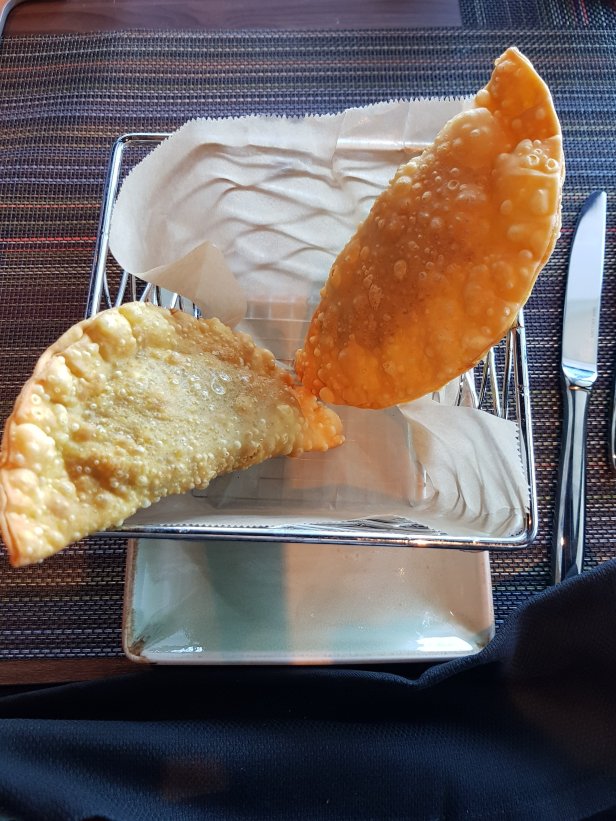 The cheese fondue was nice but I wasn’t keen on the flour tortilla pairing. The quesadillas were good but we both loved the empanadas.

For the main dishes, Chris selected the Carne Asada and I chose Alambre de Camarones: 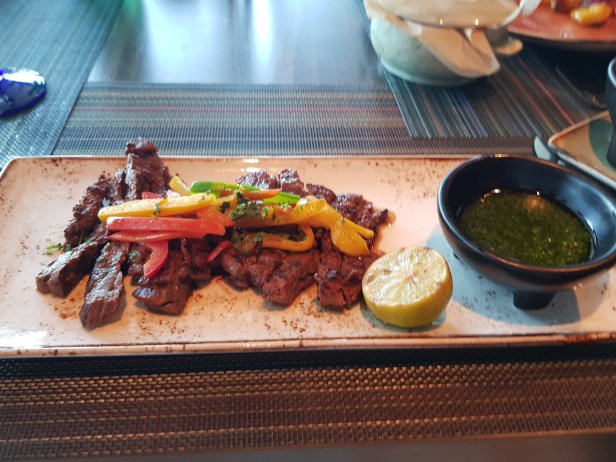 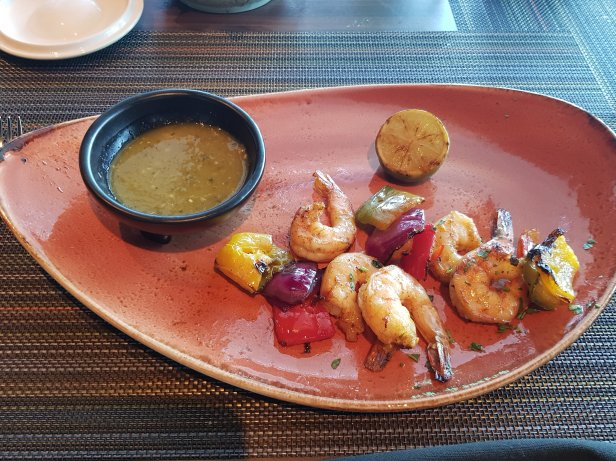 The menu said the entrees came with Refried beans and Mexican rice but strangely we only had one portion each between us. The beef was very tender and tasty. The shrimp was pleasant but seemed rather small in comparison. 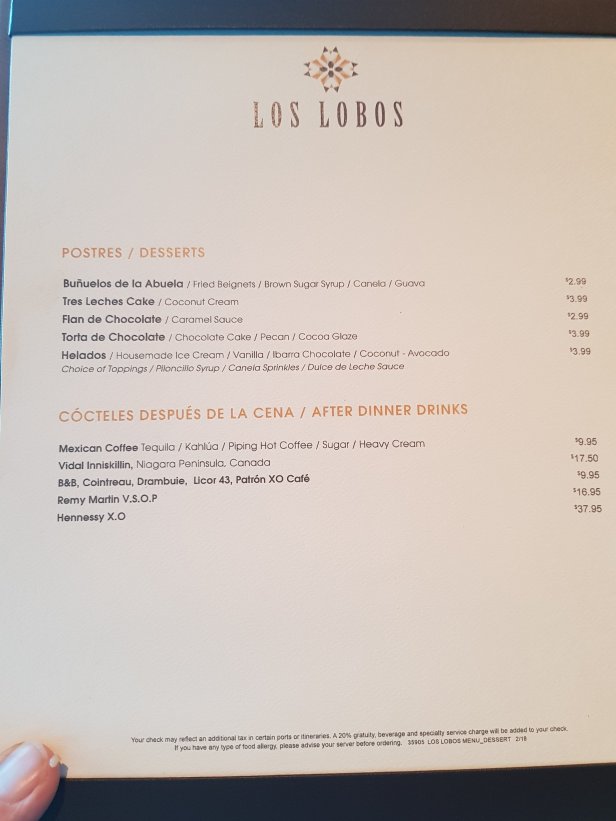 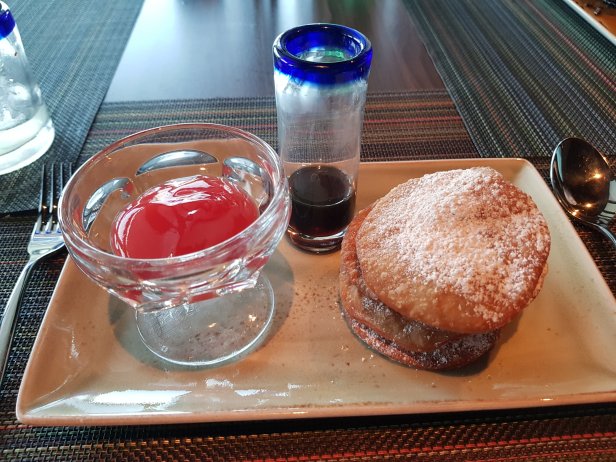 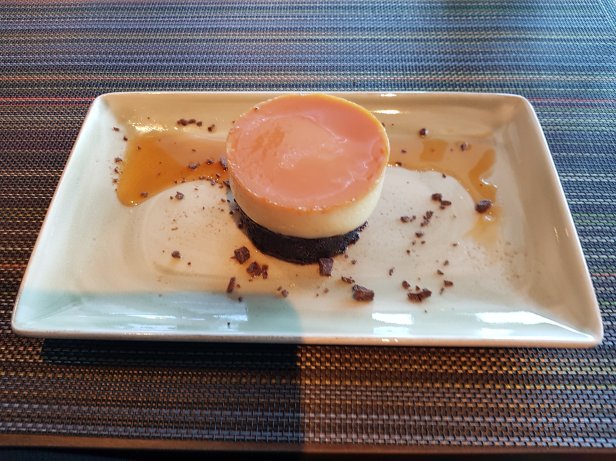 The desserts took a while to arrive – the waiter said this was because the beignets take longer to prepare. They are worth the wait though. I much preferred them to my creme caramel on a cake base.

Not sure Los Lobos is totally our kind of place – an upscale dining venue for food that you can get in a good cantina. 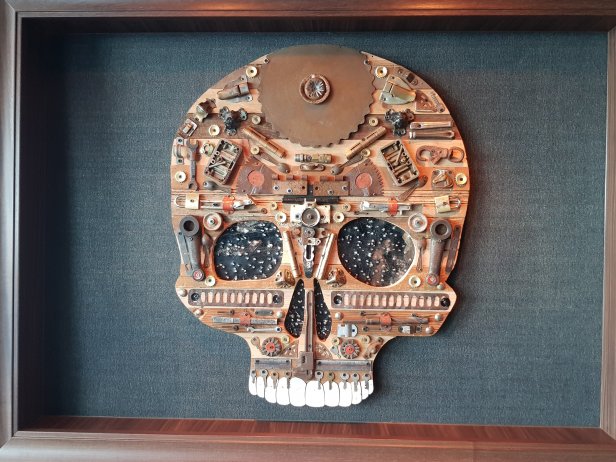 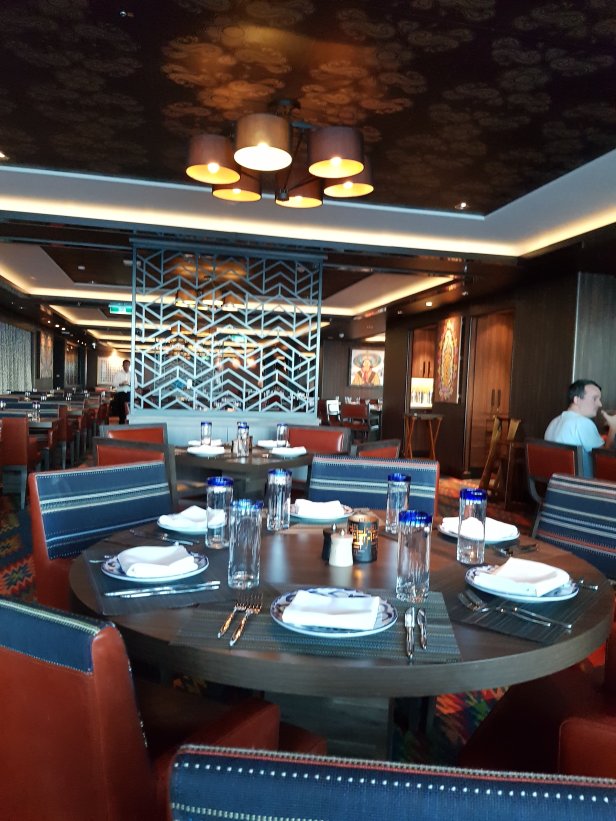 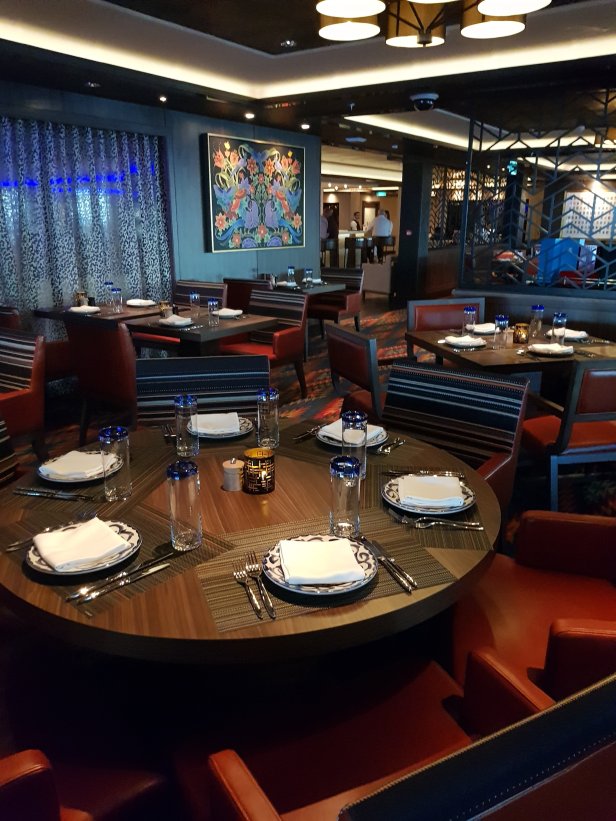 We headed back to the District Brewhouse for drinks before the next event of the evening – the silent disco.

This was advertised as Crank Up The Silence in the daily and we had to pre-book the 1 hour session starting at 10pm. A queue had formed outside The Social with 20 minutes to go and so we joined it. Soon our cards were scanned before we were given headphones to hang around our neck and let into the venue to find a seat. Here is the box of headphones waiting to be handed out: 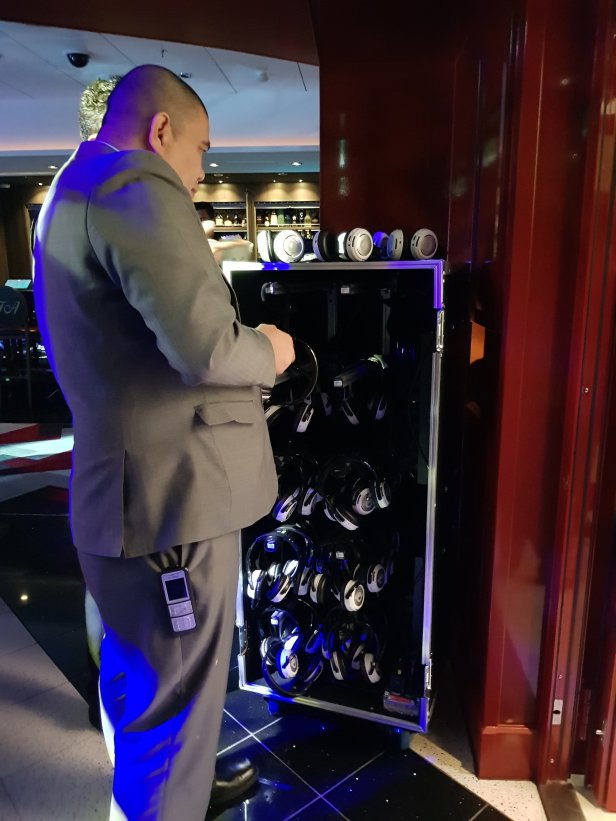 Each set of headphones were lit up in various neon colours. 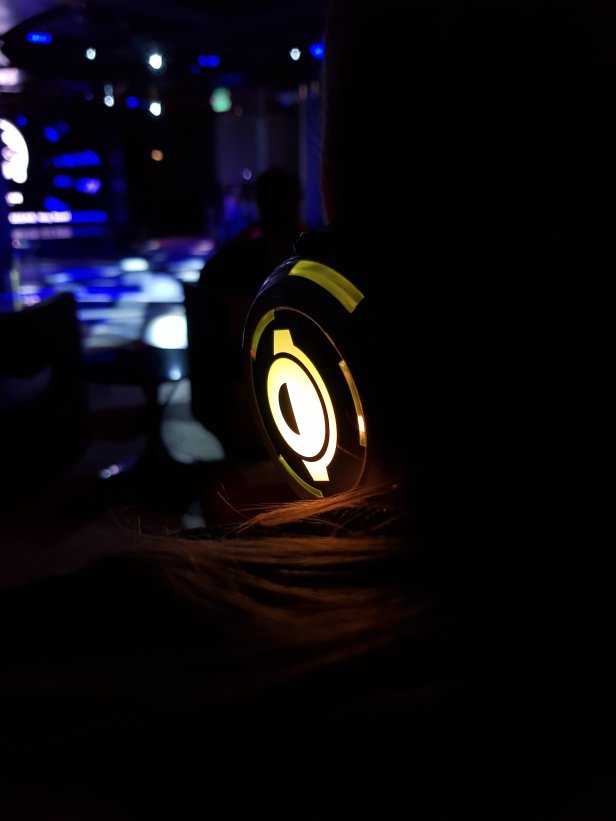 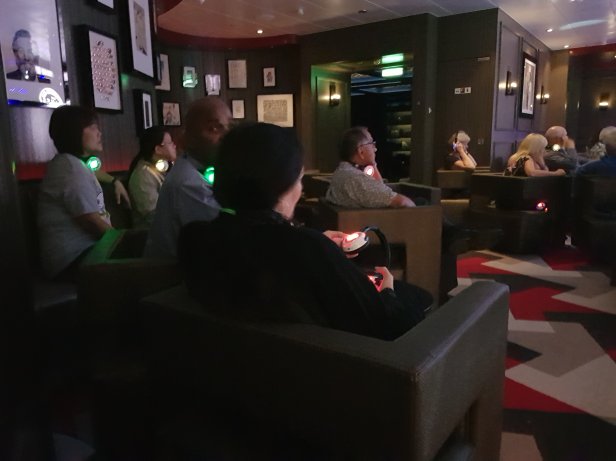 The screen gave us a countdown to the start of the session. 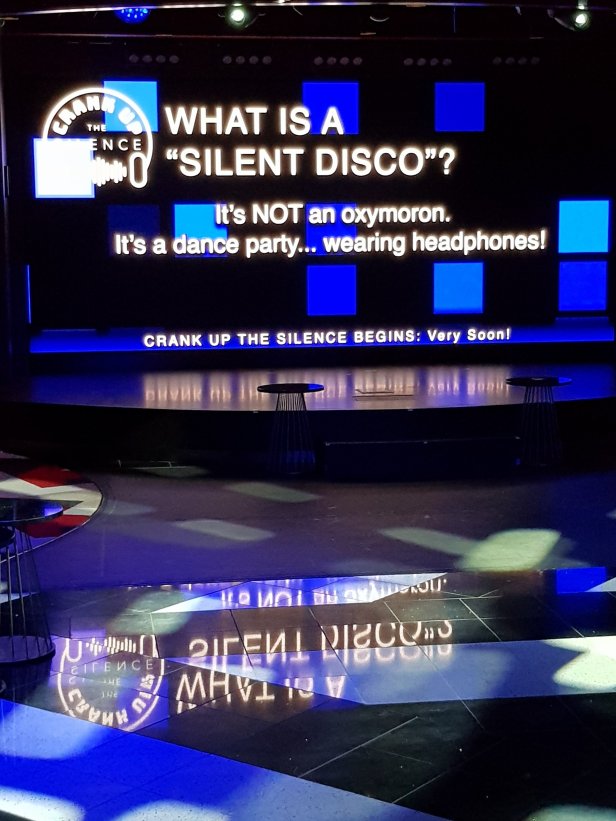 Each headphone had a volume control on the right hand side (I never found it though). Suddenly we were instructed to put them on, the music in the room subsided and the silent disco had started. People started to move to the dance floor.

It became apparent that everyone was listening to the same track. Our previous experience with a silent disco was that you can switch between 4 or 5 tracks until you find one that you like. This makes the dancing even weirder when you have different beats or genres.

So we accepted the difference and I enthusiastically joined in with dancing to Justin Timberlake where we all clapped in unison at the end. Update: Norwegian now provide a channel button so you can select music from the 70’s, 80’s, 90’s or Today.

The dance floor was buzzing for the first twenty minutes but then the music moved away from classic floorfillers to the latest hits and that lost a lot of the crowd. The tracks were pre-recorded too so the music could not be changed to suit the tastes of the audience. By the last twenty minutes there were only a handful of stragglers who stayed on in hope of a decent tune. It ended on a karaoke sing along to Don’t Stop Believing. Not exactly a good groove!

The guy who collected our headphones acknowledged our comments about the music and said they are keen to hear our feedback. Great concept but needs refining.

So we retired to our stateroom.

Here are the Day 5 Freestyle Dailies: